I used to like chickens. When I was a kid, I even had some as pets. Today I revised my fond childhood memories of sweet chickens allowing you to pick them up and cuddle them as you whipped away their still-warm eggs. There I was in my friend's yard, camera slung round my neck but sadly out of battery power, feeding the chooks for my friend. There were only 8 chickens and all of them were supposed to be locked up in a pen, but four had escaped into the fenced yard, including the protecitve Mr Rooster. Well, I casually walked up to said Rooster and hens with the full feed pan and flash! Crash! Scratch! I was ....ATTACKED!! :shock: Mr Rooster scratched me on my bare legs and knocked the feed pan out of my hand. It took me a moment to realise I had been attacked, mind you, as I just did not expect it. I stood there, staring the rooster down, and he did eventually walk away first.

His retreat didn't make me trust him or stop me grabbing a handy piece of timber leaning on the fence to make sure I had a way of warding him off 'just in case'. Just as well I grabbed that timber - he tried to attack several more times before I got him penned! Each time I approached him, board first, he thought the board was a threat and scratched it instead of me, so my ruse worked.

Mr Rooster's back claws were short and not too sharp, so he didn't break my skin, but my old legs would have been better off without the new decorations he left behind.

And I didn't get one photo of the villain to show you....so here's a platypus instead. They have sharp claws, too. And no, I have never been attacked by one! Lol! 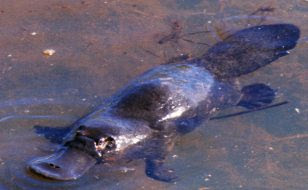 Ohhh.......I'm laughing WITH you, not AT you!! My grandparents' neighbor had an "attack turkey" when I was a kid, so I can relate!! But the Platypus is so cute!!! I wanna see a real one someday!!

Oh my! I so don't like roosters except when they are in cages at our county fair. What is it with the male species.....so intent on attack!

I love the picture of the platypus. I don't think I have ever seen one.

Oh dear Susan! Glad that you lived to tell the tale. LOL.

Oh dear naughty rooster, hope its not too sore.