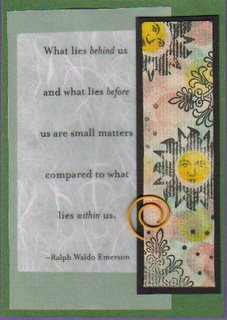 Well, I made the card for the Director - that's it with the suns on it - and most people seemed to like it. I hope the Director did. I really liked the poem and have my wonderful friend Carla to thank for that. I used the 10 Minute Collage Technique for the stamped images and wound up with some interesting bits and pieces I will be able to make into other future projects. You can see how to do a 10 Minute Collage here - thanks to a lady named Trish Bayley:

I will definitely use the collage technique again, especially when I have more choice in the stamps I can use. My collection is a bit limited at the moment. Maybe alphabet letters would be one way to go in future? With a couple of other small/medium/large stamps? Must try that - hmmmm!

Other news: there is a scrap booking workshop being held in my town at the end of September! I so want to go. I hope I can. I am sure the scrap booking techniques can be used in card making. And I have a special reason for wanting to do some scrap booking - our son's wedding is coming up in October, and I sure do want to make a special album for that. One for him and his new wife, and one for us. Must find a way to go! I'll tell you about it after I do :-)
Posted by Susan Hurley-Luke at 9:18 pm 1 comment: 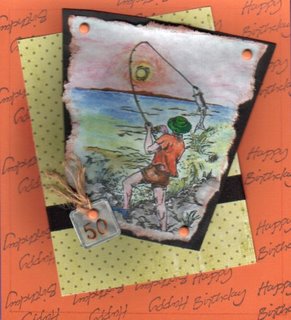 I finally got my DH's card finished, in spaces when he wasn;t around to watch! He does know I will make him a card but this time he has no idea what it will look like - I borrowed the stamp I used so he won't have a clue! I made it big enough for everyone who is coming out to dinner with us tomorrow night to sign. It should be a nice keepsake for him. WHen I think back to a decade ago when he turned 40, that was one thing I would have liked to have had - a memento of who was there that night. So this decade, we have one! He LOVES to fish, so I thought this might be appropiate for him. It was fun to make the fish shine with a silver gel pen.
Posted by Susan Hurley-Luke at 5:58 pm 2 comments: 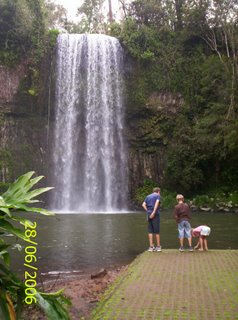 After reading some of the recent blogs added to the SCS blog site, I remembered that I have a picture of Millaa Millaa Falls and that some of you might like to see that. So here is a picture of the falls. I would like to put in a short video, but I don't know if this site could handle that! Besides, it might make the page soooo slow to load.

I am going to be making a card sometime in the next couple of days for our Director who is leaving us to take up a job in Singapore. It is for everyone at work to sign, so it has to be a nice one. I have no idea what to do yet. Any ideas for making a 'goodbye-and-thanks-for-everything-and-we-wish-you-well-in-the-future' card??
Posted by Susan Hurley-Luke at 2:24 pm 2 comments:

Wow! It's been about a month since I posted! 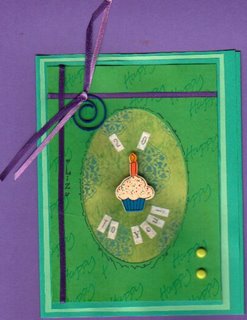 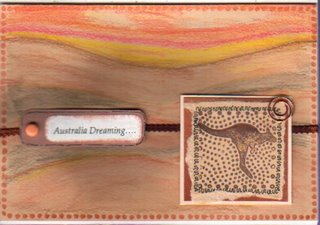 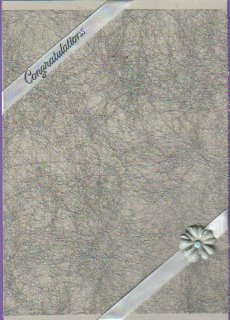 How does time slip away so quickly? I knew I had been busy but not that I had been too busy to blog for a whole month. My work is demanding - have been travelling a lot, but have found a few moments to make one or two cards. We had a graduation ceremony for our students and I made 25 photo holders in one evening - they were pretty simple but I thought they looked effective. I just used angel wire on cardstock and some ribbon and paper flowers with brads for the women. For the men, I substituted a swirl clip for the flower. Each holder turned out slightly differently, and the students can put their grad photos under the corner ribbons and then frame them.

Another thing I did was make an Aussie card for a friend in Canada who has been ill. I got to play with water colours again - the more I use water colours the better I like them. Another stamping friend I have in another State was selling some stamping magazines which I bought, and one of them had some great water colouring tips, so I plan to do more water colouring projects in the near future.

Then it was my DD's 20th birthday and I made her a card in some of her favourite colours. I found some oval punched cardstock and a friend had sent me the cute little cupcake embellishment, and I found out that my DD loved the bg paper I decided to use, which was a great coup. She and I do have quite different taste in many things so I have to pay close attention to clues like that! She liked the card. I found this lovely saying to put inside too -

She liked the saying probably more than she liked the actual card!
Now I think I will stop and see how this post is going to look on the blog...
Posted by Susan Hurley-Luke at 10:31 pm 1 comment: