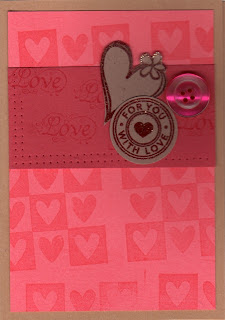 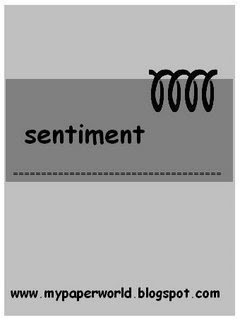 After the sad news that my blog apparently isn't worth anything, I was so cheered to receive some comments from people who assured me they valued it! Thank you so much! It means a lot!

I was cheered enough to sneak out some craft materials to make Nicola's challenge card Sketch #3! I was thinking of you all who said such nice things when I made it, so it's really a Valentine's card for all of you :-)

Oh - and I think this card also qualifies for Pearl's challenge to make a card with some hearts on it too :-)

CORRECTION: Since I first posted this, I have been advised by Pearl that the heart card challenge was not really hers in the first place, but that now the idea has been suggested, she will be posting challenges in future herself! Hooray!
Posted by Susan Hurley-Luke at 3:59 pm

Susan it is absolutely gorgeous.

Cute card, love all the hearts on it, very pretty colours too! Thanks for stopping by my blog! Kim x

I was about to come over here & correct that the challenge was not originally issued by me ! lol

But you know what I think I would do just that ! Issue a challenge myself for a change ! instead of just doing them ! hey ho ! ok I'll think of something !

Wow thats fast of you to self correct ! lol Yes I do hope you'll have a go at my very own one off challenge for a start !

Susan, I value your blog very much!
and I LOVE your card! It's so pretty, and I love all the hearts and the paper piercing!
Thanks so much for getting your craft things out and doing my sketch, especially since I know youve been trying to keep your craft things tidy, while you do house viewings!
Nicola xx

A wonderful cards Susan and of course I think your BLOG is "Priceless"! That's why they couldn't put a value on it.

such a pretty card .Great job!

Absolutely lovely!! The bg stamping and the embellies are great!!