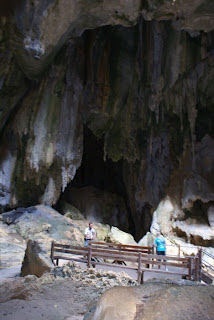 I realised I had not shown you a true idea of scale in the caves after reading Lee's comment about only going into VERY LARGE caves - Lol! So I thought you may be able to stand just one more picture of the caves. I excluded it before because the camera had to hold its aperture open for a long time and the people moved, so they are blurry. It does show the scale of the caves in some places. There are very narrow bits as well - I just didn't stop to take a pic as there were people behind me wanting to get through without being stopped in a crouching position!

All the best with your blog candy, Chriss, Diane and Lee. I hope you get LOTS of visitors!
Posted by Susan Hurley-Luke at 9:58 am

Oh my WORD Susan!!! Now that is definitely one HUGE cave!!! No worries about claustrophobia there!!! LOL And I LOVE your photos.......thanks so much for sharing them!!! And thanks for sending more folks my way.....this is fun!!!!

Now that is impressive! May I ask what type of a camera you have? Your pictures are so wonderful. Is it an SLR or a point an shoot?

Wow ! Susan ! what an interesting time for you checking out these caves ! Being the urbanite that I am I doubt very much I'd ever go near one ! lol

Wow!! those caves are just amazing!! Thanks for sharing your pics :)
hugs
Chris xx