Bird Ballad Anniversary Card and some other card ideas 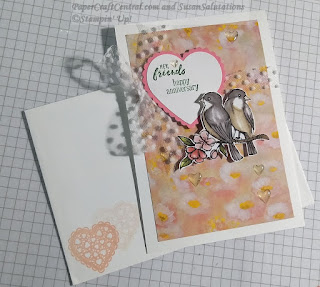 It has so many beautiful designs. I especially love the birds that have been coloured in and seated on beautiful branches with leaves and little flowers. I have fussy cut numbers of these little scenes and popped them up on card fronts.  I thought the pair of birds shown above were perfect to wish my friends a happy anniversary.

There are many choices of birds for your cards. Here is one who landed on my card's windowsill to wish someone a cheery hello! This trio of birds made a fancy card even fancier. I made my backgrund by making a grid of coloured cardstock squares, then layering a laser cut sheet on top, and finally adding my popped up birds and a pretty bow. Quick cards are possible using a stamped image of the birds  on top of the designer series paper. The single stamped bird looks mighty fine on the envelope. The birds take next to no time to colour with Stampin' Blends. 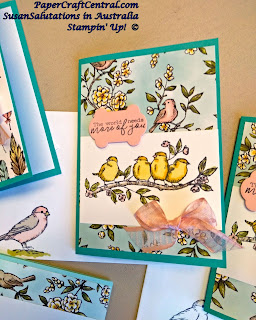 I made a Z fold card for a special friend's birthday, this time highlighting the pretty flowers on the designer series paper, but making sure I added in some fussy cut little birds at the front. 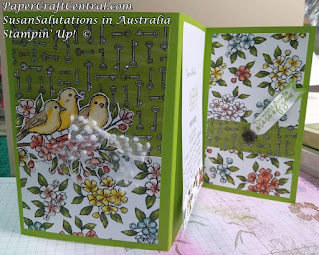 So can you see how beautiful and versatile this designer series paper is?

It won't be available much longer.

If you want to grab a pack or two, order from SusanSalutations as soon as you can to avoid being disappointed.

It could sell out any time now.