I don't know what I was thinking. It's winter here and I got drawn to making a fan card? Well, we did have a small heat wave this week, but it is cool again this morning! I definitely don't need a fan! Lol!

The card idea was so pretty though, I just had to CASE an idea from Carolyn King. I saw a card of hers that showed a folded doiley fan, and it would not leave my mind till I had tried it out. I tried out her layout too but there the similarities sort of ended.

Here's the card I made: 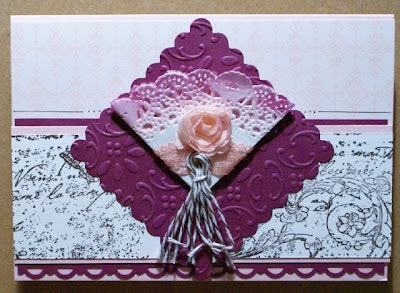 You just fold your doiley in quarters to make the fan, and ink all the edges. Ruffle the edges a little to make them more three dimensional. Add some pretty lace and a sponged rose and a tassel.

I chose Pretty in Pink and Rich Razzleberry, and the brown is Early Espresso. I made the little tassel by wrapping Baker's Twine around two fingers abotu four times, then wrapping and tying the end around the top third. Cut the long ends to suit your card.

The square is cut with a Big Shot scalloped square die then rolled through an embossing folder. The stamping was done with a wheel (Very Vintage). I used the scallop edged border punch too, And the lightest background came from a paper stack.

Here's another one with a Rich Razzleberry rose: 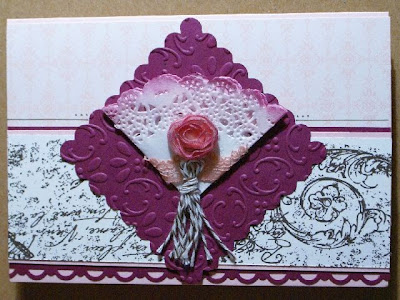 Yes, I even made two of them. Then I made up kits for this week's Craft Class ladies. And they didn't seem to think it was strange to be making fan cards in winter either! At least, they didn't say they thought it was strange. Lol!

Posted by Susan Hurley-Luke at 7:23 am

But it was hot for a few days after all! hehe. Such a pretty card. I love your fan. Vx