Do you ever have one of those little puzzles to solve when crafting, and you fall asleep at night before you solve it? I had made a cake and wanted to put 'Happy Birthday' on it in drizzled chocolate, but there was no chocolate left in the cupboard. Probably because I had eaten it at some stage. Anytime there is chocolate in the house, it doesn't last long around me! So, there was no chocolate. Alright, I went to bed still wondering how I was going to add a greeting to my birthday cake in the morning.

Somewhere around 3am, my eyes popped open and I suddenly knew what to do! I would make a paper banner cake topper! There were quite a few on the 'Net and I used my memories of them to work out in my head how I would make my own. Instead of counting sheep, I counted punches and paper....zzzzzzz

In the morning I went straight to my punches, cardstock and Big Shot dies, and made this: 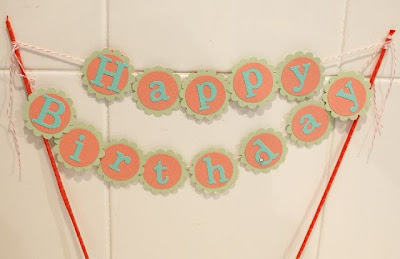 I used a retired alphabet die set I had, and the scallop and circle punches that fit the font. The colours I chose were Crisp Cantalope, Coastal Cabana and Pistachio Pudding. Then I got my husband to bring me two clean bamboo skewers from the kitchen and covered them in Epic Day Washi Tape from Stampin' Up! (well, it was for his birthday cake, which he shared with a few other friends later in the day, so he didn't mind helping). I found some Baker's Twine in Calypso Coral to adhere the punches to, in two rows, then covered the backs with some Calypso Coral circles as well. The ends of the Baker's Twine is wrapped and tied around each skewer in one spot.

There's a rhinestone on the letter 'd' as well, and I might bling this topper up some more before I use it again (Yes! I foil wrapped the bottom of the skewers so I could recycle this! It's now safely stored away in its own clean little cello bag with a clean card behind it with a bit more Washi Tape to hold it in place).

So next time you can't sleep, I recommend counting punches and cardstock. I slept like a baby after I did :)

Supplies: (You can order the numbered ones from SusanSalutations, 24/7!)

Oh you are a clever chick! What a light bulb moment that was! I like the washi tape around the skewers too. You made a wonderful job of this banner and I am sure it was a hit. I hope you kept it for future uses. Vx