FOUR cards in an afternoon!! 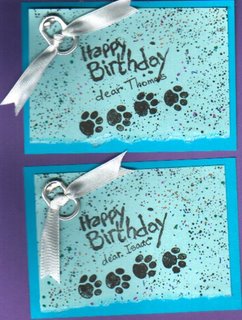 Wow - this is a record for me! I managed to make not three cards, but FOUR cards this afternoon and still got dinner on the table in time (just!) It was a lot of fun. I used new stamps I got for my birthday as well as ones I had just received from my SU! order. These little cards were made for two boys who had birthdays this week. They know each other well so I made them the same to stop them feeling like I was playing favourites. The Itty Bitty Backgrounds came in handy! The boys also tromp mud into houses a lot and both like animals, hence the other stamping messages!
Posted by Susan Hurley-Luke at 9:54 pm