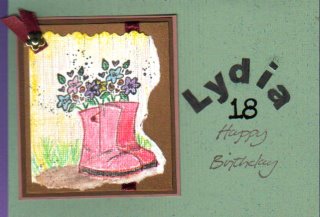 I thought I had cased a card this week. It looked so cute and I had just the person to give it to, I wanted to do something quickly, so I tried to case a card. It turned out pretty differently anyway but the layout was similar and the central idea of the boots was also similar - I cannot say it was the same because, lacking the boots stamp, I drew them! It was also an attempt to improve my water colouring technique. It was a fun card to do, and I wound up taking longer to finish it than I thought! See what you think :-)
The Show was on here this week as well, and I discovered a few brave souls had entered their papercraft - scrap booking and card making - so I think next year, I will do something for the Show too. (The Show is like a county fair). So many people enter their sewing, knitting, corchetting, art work, etc, it is a fun way to get feedback and even maybe win a few small prizes. Sounds like a fun thing to do to me!
Posted by Susan Hurley-Luke at 10:46 pm

Susan, You must be very busy lately with those pesky life issues like work . I love these cards and am very impressed with the fact that you drew the boots. Don't put a pen in my hand. I can use a needle however!